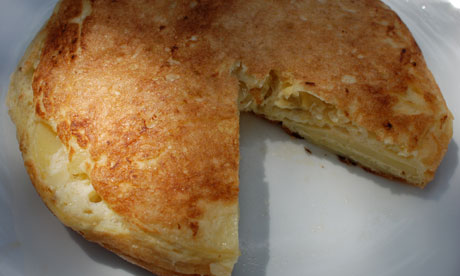 Now Eggs are a favourite of mine. In fact till I do not have a breakfast with an egg in it, I do not feel full. So, I experiment a lot with my egg.

Today, let’s talk about one of my favourites - The Spanish Omelette.

Now it’s called a Spanish Omelette or Spanish Tortilla by the rest of the world.

Potatoes are called Patatas or Papas in Spain.

Now the Omelette consists of a thick egg omelette made with potatoes and fried in olive oil. But people do innovate, and over the years, apart from the base ingredients, one can also include peppers, zucchini, eggplant, mushrooms, and ham. Apart from these, if you have any more additions, do let me know. I would love to hear.

In Spain, it is commonly served as a snack or a picnic dish. As a snack, it may be cut into bite size pieces and served on cocktail sticks or cut into pie style portions. Like I said, it has loads of eggs in it, and I eat it for my breakfast, served with Bread and mayonnaise and/or Tomato ketchup.

By the way, Omelette is the French spelling for Omelet. You can spell it either way. I however, am a proud foodie, and roll between the two not wanting to be confined by its complexity.

Email ThisBlogThis!Share to TwitterShare to FacebookShare to Pinterest
Labels: Tell Me More